Legend goes it was the World Series in 1986, when the Red Sox lost to the New York Mets, that drove Barry Levenson to do it. Levenson, a die-hard Sox-fan, was depressed and confused when the game ended so he drove to an all-night supermarket and aimlessly wandered the aisles. As he worked his way down the condiment aisle, they say he heard a voice calling out to him from the mustard section. The voice said, “If you collect us, they will come!” Believing his true calling had been revealed, Barry bought more than a dozen jars of mustard and took them home, resolving to build a place where people could come from everywhere to view mustards from around the world.

Today, at the National Mustard Museum in Middleton, Wisconsin, visitors can peruse nearly 4,000 different types of both foreign and domestic mustard, as well as antique jars and vintage mustard advertisements. Barry fulfilled his dream and built his museum to house what is thought to be the largest collection of mustards in the world. In addition to mustards made with berries, truffles, liquor and beer, you’ll find a special area at the museum known as Poupon U, which has its own school fight songs. You can even buy a T-shirt to support Poupon U.

Certainly worthy of its own museum, mustard has been considered for centuries an exceptional seasoning and condiment by civilizations around the world. It was cultivated and used medicinally in ancient Greece, where Pythagoras, the mathematician, wrote of the mustard seed’s medicinal properties in remedying digestive system disorders and as a warming poultice for respiratory ailments. Mustard seeds were found in tombs of the ancient Egyptian pharaohs.

The Romans, who were known for eating the mustard leaves as green vegetables, enjoyed a concoction of unfermented grape juice or early wine in which mustard seeds were steeped to produce a fiery-tasting beverage. It is believed the Romans were responsible for bringing mustard to Britain in that form.

Some say the Romans also gave mustard its name. They called the crushed mustard seeds “sinapis,“ which was mixed with the “must” of the new wine. The paste that resulted from the juice was called “mustum ardens” or “burning must.” This supposedly eventually evolved into the word mustard.

Some accounts say mustard, brought to France by Julius Caesar’s troops, was being made as early as the thirteenth century in Dijon France, still known for housing the world’s premier mustard makers. In the 1600s, Dijon’s mustard makers were given exclusive rights by Louis VIX to manufacture Dijon mustard. Today French law still requires manufacturers there to follow strict guidelines for its production.

Just when the mustard seed was first developed into a condiment isn’t known. However, according to Mrs. M. Grieve in A Modern Herbal, in its early use as a seasoning in Britain, mustard seeds were formed into balls using honey or vinegar with a little cinnamon for keeping until needed. The balls were then mixed with more vinegar to form a sauce for flavoring meats and fish. The concoction was also touted as an aid to digestion.

It was a Mrs. Clements of Durham who at the close of the 18th century invented a method of preparing mustard flour by removing the seed husks, passing the seeds through rollers and then reducing the seeds to powder with a mortar. This was known as Durham Mustard and hundreds of years later it became London Mustard. For a time, a famous horseradish mustard was made in Tewkesbury in Gloucestershire, which William Shakespeare raved about in Henry IV.

In 1804, Jeremiah Colman, whose name is still associated with fine yellow mustard, began making his condiment using a mixture of two kinds of seeds and packaging it in little yellow tins. About the same time, Italians were mixing orange and lemon peel with mustard flour to make their own flavorful condiments. In France, in 1853, a man named Maurice Grey developed a machine that could grind and sift mustard seeds. He went into business with Auguste Poupon and together they helped bring prepared mustard to the world.

Interestingly, it is a rather complicated enzyme reaction that produces the heat and flavor for which mustard is known and loved. In simple terms, the crushed mustard seeds require hydration at room temperature to release the volatile oils that give the condiment its characteristics. The mustard powder or flour is mixed with water to form a paste, which then must age for at least 10 minutes to allow the enzyme reaction to take place before other ingredients can be added. Once the flavor emerges, a preservative, such as salt or vinegar, can be added.

Most of the mustard seed in the world comes from Western Canadian prairies, and North and South Dakota, with England and Hungary the only European countries having significant crops. The seeds are sown in spring and ripen quickly, normally by the end of summer. According to Rodale’s Illustrated Encyclopedia of Herbs, mustard is thought to be an effective companion plant because it has been reported to stimulate the growth of fruit trees, cabbage and beans. Research has shown that when planted with collards and Brussels sprouts, wild mustard wards off cabbage aphids and flea beetles.

A member of the cabbage family, mustard has many seed varieties but only three types of seeds are grown commercially. Yellow seeds, Brassica hirta, are the most popular and functional, with their mellow flavor and low heat. The only real difference between the hotter brown mustard seeds, and oriental seeds, both Brassica junce, is the color of the seed. True Dijon mustard is made using only the brown seed, which gives it its distinctive flavor. Oriental mustard seed originated in China.

For medicinal purposes, white mustard, Brassica alba, and black seed, Brassica nigra, are favored. Mustard’s most famous usage is as a poultice or plaster placed directly on the chest for inflammation from pneumonia or bronchitis. The poultice also draws blood to the skin’s surface, which helps decrease congestion and pressure around organs. However, if left on the skin too long, mustard can cause blisters because its heat increases, so herbalists suggest placing the poultice on paper or cloth and place that on the skin. You can also pour hot water directly on black mustard seeds for a soothing footbath, which is said to also soothe a headache.

Mustard flour can be added to boiling water as a remedy for hiccups and the oil gleaned from the seeds is said to promote hair growth, aid in rheumatism, and remedy sickness from snakebites, if taken soon enough. As was known in Egypt and Greece, mustard aids digestion by stimulating the stomach’s mucous membrane and increasing the secretions of the pancreas. But taken in too large a dose, it can cause vomiting, and over a prolonged period, black mustard can irritate the stomach and intestines.

Some people, like Barry Levenson, consider mustard to have magical properties. Before Barry stumbled upon his life’s mission in the condiment aisle of his local grocer, he was an Assistant Attorney General for the state of Wisconsin. The morning he argued the case of Griffin v. Wisconsin (483 U.S. 868) in April of 1987, at the U.S. Supreme Court, Barry was preparing to check out of a room at the Hyatt in Washington. As he gathered his belongings, he noticed a used jar of mustard left on his room service tray. Not wanting to waste the good paste, he pocketed it. Going directly to court, Levenson argued his case with the mustard jar in his left pants pocket. He won by a 5-4 margin. No one can say for sure to what his victory can be attributed that day. But if you ask Barry, he’ll tell you . . . it was the magical jar of mustard in his pocket.

TVBR Editor’s Note: For one of our favorite recipes using mustard, see our Mustard Egg Salad with Dill recipe. 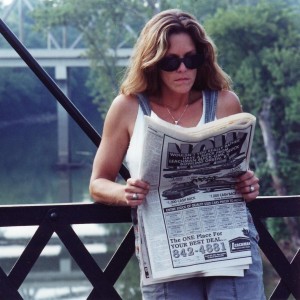 JENNIFER CONN joined WKSU in February 2019 as Akron reporter. A Northeast Ohio native, Jennifer has covered Akron news for cleveland.com and Crain’s Akron Business. She was also a member of the inaugural staff of The Devil Strip, and wrote long-form features on Akron’s burgeoning music scene, the city’s punk roots and its historic downtown. As a freelance writer, Jennifer has covered numerous industries, including the automotive after-market, cyber security, herbal healing and the environment. As a communications professional, Jennifer was vice president of communications at Akron Community Foundation, and senior communications development officer at the Summa Hospitals Foundation. She also served as senior writer at AKHIA Public Relations and Marketing Communications. She earned a bachelor’s degree in English and a master’s degree in journalism from Kent State University. She is currently working on a post master’s certificate in Teaching English as a Second Language.
All Posts
Cart
Checkout - $0.00
Scroll to Top