Friday night is pizza night and has been for our lifetime. Back in the late 60s and 70s, it was pizza from Papa Felice’s on Tallmadge Road, and the pizza was ordered late night to coincide with the 11:30 p.m. opening credits for the “Hoolihan & Big Chuck Show.”

From the heart of Playhouse Square in downtown Cleveland! From high atop the Television 8 building! It’s “The Houlihan & Big Chuck Show!”

Houlihan and Big Chuck’s shenanigans and horror flicks were the perfect entertainment for Friday night pizza, and one of their most popular long-running skits featured “Mushmouth Mariano,” a speed eater who could polish off an entire pie in mere minutes. Mushmouth, to the amazement of an estimated 2 million viewers, lost his pizza-eating championship crown to “Chris the Fairview Fireball,” a German Shepherd Dog. The contests featured pizza from Angelo’s Pizza but there was a treasure of pizza options in NE Ohio, back in the day: Luigi’s (still serving!), Emidio’s, Rocco’s, Laconi’s, Parasson’s, Fiesta, etc.

We didn’t know how lucky we had it until we moved South and found only chain pizza, except for a few bright spots like the authentic IP3 pizzeria on Franklin Street. IP3 pizza is the real “fold-it-in-your-hand” deal and the staff is welcoming and remembers your order. Like family. And it’s not unusual to see a really tall Tar Heel visiting the kitchen after Bball practice. IP3 is the very first place we’d take our exchange students after they arrived for their school year and frequent subsequent visits made it an indelible part of their American experience.

After years of providing pizzas to teenagers, we’re tired and older now. Franklin Street traffic and hullabaloo keep us home instead of out and about on a Friday night. And retired from the football/rugby schlepping-Gatorade-and-pizza-and-sub-sandwiches circuit, we have more time for home cooking.

Mr. Jones dusted off his old bread and pizza dough recipes from our pre-parenthood days and began experimenting in the kitchen again. Our old standby, the whole wheat crust seemed too thick and gluey. And it was a time-consuming process. Mr. Jones read through old recipe books, internet cooking sites, and studied videos. Pizza dough should be easy, right? There are only a few ingredients, right? Flour, yeast, water. 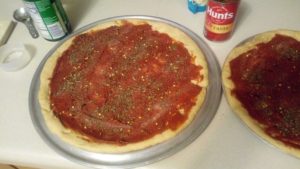 And then, it struck him. It IS the ingredients that matter. Down to the flour. The secret to great pizza crust, the perfect blend of crunch and chew, is using 00 flour, doppio zero flour, a finely milled flour used in Italian bread, pizza, and pasta recipes. Doppio zero flour makes enough of a difference that it’s more than worth the extra costs and the trouble to track it down.

Mr. Jones takes it from here:

ROGER WILLARDSON is a founding editor and longtime contributor to The Vincent Brothers Review.
All Posts
Cart
Checkout - $0.00
Scroll to Top